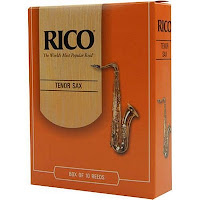 I would have never guessed these reeds would turn out to be a part of my regular setup, but they have now been on my mouthpiece every day for a week.  Three gigs and counting...

I have been playing the orange box reeds on my Florida Otto Link metal mouthpiece, and I get a full and balanced tone throughout the registers of the horn.  There is enough bite and vibrance to cut, but the tone isn't too bright or edgy either.  I should also mention that I place my ligature toward the back of the mouthpiece, and reeds can sound a little thin if I place the ligature further to the front.

The response of the reeds is fantastic though they need to be pushed a little more in the low end to get the same easy feeling as the rest of the range.  Climbing into the altissimo register feels very easy.  The extreme flexibility and ease of play does have a down side.  The reeds don’t last as long as other types of reed which are made with a less flexible cane.

As far as reed consistency goes, I’ve now played on six orange box reeds and I’ve only had one that I would not play on a gig.  That being said there is a great degree of variation between reed strengths in a single box.  I’m playing on size 3 ½ reeds and the strengths have ranged from almost too easy to almost too hard.  There does seem to a fair amount of inconsistency in that respect.

I’ll let you all judge for yourself.  Here are a couple of sound clips for your critical ears.  First, is a full range-ish chromatic scale, and the second is a blues.

Conclusion: Rico orange box reeds are surprisingly good when combined with the right setup.  They can produces a full and balanced tone.  On the negative side the reeds don’t last as long as some other types, and they are fairly inconsistent in terms of reed strength.