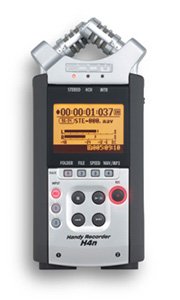 I received a request to review the Zoom H4n hand held digital recorder, and I've finally had enough time to fully explore the thing.  As far as saxophone goes the H4n is fantastic, and I'll go into the details of close micing a sax using the H4n.  Of course, its also useful for a number of other things, and I'll talk about those as well.

The H4n is one of Zoom's newer handheld recording devices, and so, of course, it needed the best features of the old device and some new features to set it apart.  What stands out from the get go is its ability to plug in two external microphones (phantom powered if you like).  You can record simultaneously with the built in mics and the two external mics, which results in a number of possibilities for making a mixable live recording.  For those of you who are wondering, you can use the accessories that come with the H4n to mount it onto any microphone stand.  Handy, right?
Another standout feature is the Zoom's new ability to do 4 track recording on the device.  Not only can you record up to 4 editable and mixable tracks but there is an easy to use click track feature and even an array of digital effects like reverbs and oscillators.  Another important mention is its ability to record in number of different WAV and mp3 formats.  The only drawback is that you cannot simultaneously use the stamina mode (two double A batteries last you 11 hours in stamina mode) and record to mp3 at the same time, but its easy enough to convert to mp3 afterward using iTunes or a similar program.  Two double A batteries in normal mode last closer to 6 hours, and you can always just plug the thing in.
Now, for all of you saxophonists, how well does the H4n record saxophone?  Well, barring the studio, this is my favorite way to close mic my saxophone, meaning playing into a microphone someplace between 6 inches to a foot from the bell.  The sound quality is fantastic and really captures the entire breadth of tone coming from the saxophone.  I like the Zoom much better than my middle class Shure condenser microphone simply for the H4n's ability to capture the full spectrum of the saxophone's tone.  If you like you're able to get a very live sound including little details like the clicking of the keys, or you can adjust the microphone sensitivity down and get a much closer to studio feeling while still capturing the entire depth of tone.  The following tracks are two examples of close micing the saxophone using the H4n.  I also used the H4n's 4 track recording capabilities to make these tracks.

My Favorite Things and Fifth to the Throne


The live setting is the most obvious place for the H4n, which it excels at.  I've recorded a number of different events, and the Zoom has surprised me with its excellent sound quality and accuracy.  The automatic microphone level adjustment feature makes live recording especially easy.  The feature prevents clipping by adjusting the microphone level lower automatically as it records.  The small let down here is that the only way to turn the microphone level back up is start recording a new track or simply turn off the feature, which could cause a problem if you were using the feature and had some uncharacteristically loud sounds in the middle of the track.  Here are two examples of live recording I've done using the H4n.  Both of these were recorded live at Chris' Jazz Cafe in Philly with my group Unconventional Riot.

Ben plays Beatrice and Introduction to Ducks In a Row
Now that you've heard all the positive, I should also inform you of the negative.  The menus and navigation system are a little elaborate and require a little exploration to get to what you need.  The features are straight forward and easy to use, but the click wheel and multiple sub menus sometime make you wish you had something a little more intuitive.
There was one particular problem I found which was very surprising.  The first 4 track recording I did I had recorded the electric piano into my computer using Audacity.  I then grabbed the WAV file and put it onto my Zoom without a hitch.  The second time I attempted this same procedure I recorded the electric piano using Cubase LE 5, which came with H4n.  When I attempted to import the WAV file the Zoom would not recognize the file.  Instead I had to use the H4n's stereo mic input to rerecorded the track directly onto the device.  I haven't spent much time trying to figure out why the H4n wouldn't recognize the WAV file produced by its accompanying Cubase software, but it wasn't anything obvious.  That has easily been my most negative expeience using the Zoom.
Conclusion: Zoom's H4n is fantastic for close micing a saxophone, and it excels at recording in live musical settings.  The positive, in this case, easily outweigh the negative including an expansive and less than intuitive menu system and some partial incompatibility with its accompanying software.
Posted by Ben Britton at 12:00 PM