Writing out a solo does two things for me. One, it helps me memorize the changes of an unfamiliar song quickly, and second, it gives me the chance to develop some ideas more carefully than I otherwise would be able to. Don't get me wrong, I'd rather be improvising, and I'm usually happier with the more spontaneous feel of an improvised solo. However, writing out a solo for practice purposes gives me a chance to dig deeper than I usually would into a certain concept or number of concepts. By the way, this isn't an original idea at all. Lennie Tristano had his students writing out exercises back in the 1940s, and the Lee Konit'z tune, "Subconcious-Lee", actually started as one of those exercises.

What concepts be those? Well, for this example, shown below in tenor key, I combined polyrhythms with bebop over the changes of "All of Me." 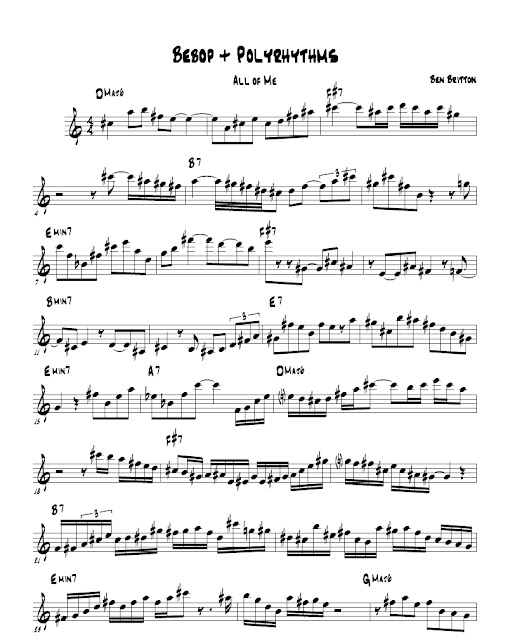 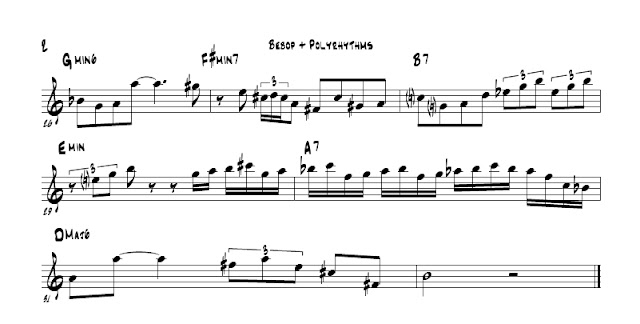 Here is a clip of me playing the exercise - All Of Me Etude Ben Britton.wav

After writing out the solo, I practiced it for a while. I actually practiced the hardest parts away from the horn while driving in the car, just memorizing the lines and thinking through them at tempo. Now, I'm at the stage where I'm improvising and experimenting with different polyrhythmic ideas using ones similar to those I've written out as well as delving into unfamiliar territory.  Next post I'll talk about the next stage of the process which is carrying the that heavy experimentation, which musicians sometimes feel more comfortable doing while writing, into improvisation.

For anyone interested below are links to high quality PDFs of my exercise on the changes of "All Of Me" for tenor, alto, and concert.