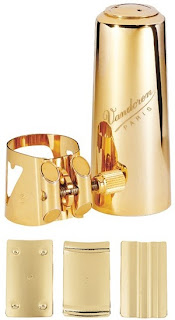 Recently, my attention has been turned to ligatures. I was experimenting with some different ligatures on my Florida era Otto Link metal mouthpiece, and I arrived to the conclusion that the modern Otto Link ligature not only works well but sounds fantastic. On the way to that conclusion I revisited my Vandoren Optimum ligature.

It's a somewhat lesser known fact that the Optimum Ligature made for the metal V16 tenor mouthpiece fits very nicely on a metal Otto Link tenor  mouthpiece. It definitely needs to be considered as a third major player in the Otto Link ligature arsenal. In my opinion the #1 player is the original ligature produced by Otto Link. The two 2nd prize winners are the 2 screw metal ligature made for Selmer's metal mouthpieces and Vandoren's Optimum V16 tenor ligature. Of course, a Rovner ligature also fits, but I don't recommend them because of their extreme dampening quality.

So, just how well does the Optimum work? Importantly, it secures the reed very well, and you can easily put a lot of pressure on the reed for a very tight hold. As far as sound production goes, the ligature definitely plays a role. No matter which of the three interchangeable pressure plates you use, the Optimum enhances many of the deeper overtones and adds a rich tone quality to the Link. It also rounds out the sound of the Link, which unfortunately takes away from the definition of the tone.

The three pressure plates seem to each be a variation on a theme. They all sound like gradients of the rich round tone I described above. I personally preferred the pressure plates with the four raised dots near its corners. This plate seemed to alter the sound the least from my perspective.

As always, the proof is in the playing. This was recorded nearly a year ago now, when I was using this ligature  on the regular basis - SchlomoSoloExcerpt.mp3 (I'm using my preferred 4 dot pressure plate here)

Conclusion: The Vandoren Optimum (Tenor V16) ligature serves as a valid alternate ligature for a tenor metal Otto Link mouthpiece. It encourages a warm rich tone, however it rounds out the tone to such an extreme that it takes away from the tone's definition.
Posted by Ben Britton at 9:35 PM