Review of Children at Play by Victor Pinto

Today's post is an extended review and analysis of my newest release (published on Sax On The Web) written by peer saxophonist Victor Pinto. Victor is a very talented up-and-coming saxophonist who recently relocated to New Orleans as well as a jazz enthusiast with an inclination and gift for writing. 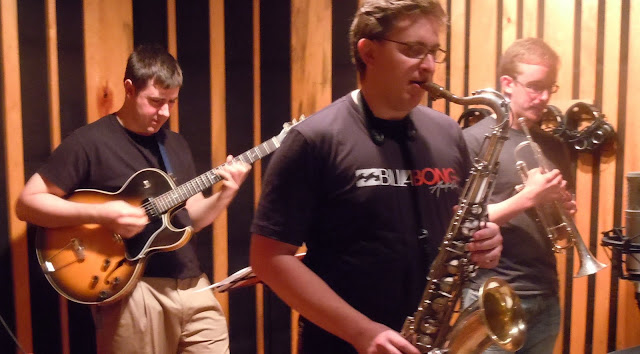 "Modern jazz" is a word that bears several meanings for jazz aficionados and musicians. The most conservative of them generally use it as a derogatory word to summarize an over-intellectual, dissonant style which uses technique, harmonic and melodic complexity for their own sake. For the rest of us, "modern jazz" is the continuity of a great tradition carved through a century of innovation, exploration, audaciousness and struggle, incorporating ideas from African, European and Oriental musical traditions.
Ben Britton's Unconventional Riot's 3 track EP Children At Play is the perfect example of the latter. His first effort as a leader of his own band, Children At Play features Gabe Globus-Hoenich on drums, bassist Jordan Berger and Matt Davis on guitar. Ben is also joined by his brother John on one of the tracks, "Partly", which is only fitting considering the Britton brothers co-lead the 2010 self released album Uncertain Living. The presence of a comping guitar as part of the rhythm section instead of the more traditional keyboard yields a lighter, more ambiguous and evocative sound. The same intervals resonate in very different ways on a guitar than on a keyboard, and the instrument's idiosyncrasies limit the number of sounds which can be played at the same time which, again, creates a rather refreshing sonic landscape.
The title track "Children At Play", is built around a very evocative and playful melody. Based on several transforming motives, the fast-changing feel confers a mood swinging quality to the tune. Whether you have kids of your own or reflect back on your tender years, it's easy to hear the connection between the feeling of this tune and childhood experiences of wonders, discoveries and occasional stumble.
Opening with a gradual introduction of the rhythm section, first drums then bass and finally guitar, the band kicks it in a little harder when Ben introduces the first few notes of the melody. The flawless transitions between odd and even meters throughout the piece never sound forced and Ben and his rhythm section navigate through them very naturally.
There is a very interesting contrast between Ben's solo and Matt's. Britton's powerful yet lyrical tenor saxophone concept contrasts in exuberance with Davis' more intimate intervention. The difference in intentions reveals the depth in Ben's composition. The great jazz musicians of the past have left us with many unique interpretations of now "standard" jazz tunes. The reason behind these classic tunes' popularity is this very quality that they are flexible enough to allow for radically different treatments and, even transfigured far from their original versions, retain their identity. "Children At Play", with its two contrasting improvisations, gives us a taste of the possibilities of this quality composition.
“Partly”, the second tune on the EP uses several of Ben's favorite compositional devices: evolving motives and the juxtaposition of improvised sections to written parts in the heads. Introduced by the rhythm section playing chords moving in thirds, the A section of the head is based on a motive evolving with the underlying harmony, displaced rhythmically and treated with a series of additions and substractions. Taking the form of a call and response dialogue, the B section features John improvising the responses to Ben's parts on the head in. Both calls and responses are improvised on the head out. This is somewhat of a classic compositional device in jazz that has unfortunately fallen out of favor and it feels great to hear it used so appropriately.
The tune is reminiscent  of The Britton Brothers’ Uncertain Living - an LP really worth checking out by the way; it's a great sounding album that did not generate enough buzz for its quality - obviously because of the two brothers' reunion but also in the way it is constructed and in the mood created by the combo.

John Britton's very expressive trumpet playing is remarkable in its subtlety and variations. Despite the fact he favors a softer touch, John can display great velocity on demand and he never shies away from more powerful moments. Some of lines he improvises surprise by the false impression they’re about to come to an end, only to  keep on going for a few more bars and concluding in a naturally coherent way.

Inspired by his brother's handling of the framework laid out by the tune's chords, Ben makes a smooth entrance with a very lyrical, soft restraint. Listening to the rhythm section's controlled reactions to Ben's lines is a delight. Matt Davis’ guitar work, first laying down sound textures with the use of sustained chords, volume crescendos, and later switching to a more rhythmic comping is perfectly complimentary to Globus-Hoenich’s subtle drumming, gradually transforming scarce punctuations into a full drumming eruption. The melodic and rhythmic backbone is exemplary held by Jordan Berger.

Worth noticing is Jordan's bass solo. Far from the recent trend towards a focus on the possibilities for extreme speed and intricacy of the instrument, Mr. Berger demonstrates his ability for creating lines that are both inventive and naturally melodic. His use of double stops, motives, hard plucking of lower notes, inventive rhythmic figures and (dis)placements throughout his solo makes a really coherent statement.  The natural tone of Berger's bass takes the center of the stage in this softer passage centered on his instrument. Although more frequent nowadays, the departure from the common recording techniques of the 80's and early 90's, which prominently used a bass pickup captured straight to the console, resulting in a dreadfully unnatural and unpleasant tone, is a very appreciated treat.


"Good Times" is probably the least architectural tune on the EP but also the most to the point, the most primal. It is in sharp contrast with Ben's other compositions which are much more intricate and thought out. Musicianship is best revealed in its simplest form; a sustained note, a simple melody, space and silence. The center point of the piece is definitely the opening line. It is used again for the second section of the head, quickly followed by a series of distinct fragmented melodies and improvised sections, marked by breaks.
The deep pulse of the groove is punctuated by Jordan Berger's throaty bass tone and repeated patterns accenting the offbeats. The rather simple nature of the bass lines contributes to the compulsive and hypnotic aura of the tune. Accompanied with a fierce delivery of cymbal magma and powerful kick and snare pounding, both improvised excursions by Matt Davis and Ben Britton are pushed to new heights. The dissonant nature of the harmony and the rhythm section trance-inducing drive especially propels Ben's improvisation, turning his tenor saxophone’s sound into an intense cry through which it sounds like he is inspired to take more chances.
The tune ends with a skillfully crafted drums solo before Jordan Berger lays down is initial bass line and reintroduces another statement of the melody minus the first section of the opening head.
Ben Britton's saxophone sound is definitely worth writing about: it is indeed the epitome of the jazz tenor saxophone tradition. You can hear the influences of Sonny Rollins, John Coltrane and more modern players like George Garzone, Chris Potter and Donny McCaslin. However, Ben sets himself apart with a very unique tone and phrasing he uses to make a very intense statement. Powerful and raw at times but lyrical and organic when the music asks for it. Ben's masterful display of instrumental technique always serves a musical purpose and allows him to take a lot of chances, melodically and rhythmically, with great success making his improvised excursions always unpredictable and exciting.
Putting a musician's tone into words is not an easy task not only because the way we hear sound vary widely among individuals but also because an accomplished artist will put meaning in the way he/she shapes his/her tone. Some sounds also just don't have words to describe them. One thing for sure though, the most emotional players, but this is especially true for wind instruments, sing to us. Ben definitely displays this vocal quality through his horn, especially in his unique way of voicing the higher register of the horn and his approach to vibrato.
Overall, the audio engineering work on the album is of very high quality but leaves a few things to desire. For one, the rhythm section could sit more forward in the mix, especially bass and drums. Jazz, or any style of music heavily focused on rhythm, requires a solid rhythmic backbone that stands out. The groove-based feel of the tunes would have also benefited from a fatter, more impactful tone coming from the rhythm section side. There are also a few discrepancies when it comes to acoustic spaces. For instance, some elements of Gabe Globus-Hoenich's drum kit sound strangely distant while others stand out.
The amount of reverb on modern jazz guitar is best limited to just the right amount so it adds presence, enhances the size of the natural tone of the instrument rather than drench it an unnatural halo of church-like echo. Matt Davis' personal preferences are just that, personal, but a little less reverb would have generated a tighter rhythm section sound and a clearer voice coming from his instrument.
Children At Play is a great debut album for 27 years old Ben Britton. Although inspired by his peers, Ben's compositions and the sound of his band clearly deliver something different which can only get more mature as time goes by. It is no little feat to get a band to sound as tight and instinctive as those great bands which now serve as models upon which a standard of quality is based: Miles classic quartets and quintets, John Coltrane's and Wayne Shorter's quartets, Chris Potter's "Underground" band, etc. Unconventional Riot is clearly heading in the right direction and we hope for a lot of gigging and touring for this Pennsylvania based band so they can keep treating our ears with such exciting releases and mature as their musical experiences as a band deepens the deep rooted seeds of interplay planted in this album.
Posted by Ben Britton at 12:32 PM