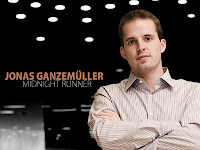 Today I want to share a brand new record from an excellent alto and soprano saxophonist, Jonas Ganzemuller. The record, Midnight Runner, is not only Ganzemuller's debut recording as a leader, but it also features one my favorite tenor saxophonists, Chris Cheek.

Ganzemuller's strengths include his strong rhythmic approach, powerful sound, virtuoso technique, and decidedly modern concept of improvisation, which are all featured in the solo above. This clip fades out at the climactic point of the solo, but the actual track continues high energy as Ganzemuller explores the entire range of the saxophone and few different tonal centers along the way. This kind of improvising is what Ganzemuller is all about. Not that he can't deliver something more subtle though! The record presents a number of different musical situations, which shows Ganzemuller's depth as a player also.

Influenced by tenor saxophonists like Donny McCaslin and Chris Potter, it's not a surprise that Ganzemuller invites Chris Cheek, one of the giants of modern tenor saxophone, to play on the album. Here is a clip of Ganzemuller's composition "Bachage", featuring himself on alto and Chris Cheek on tenor.

Chris Cheek takes the first solo on this track, and from the preview above you can easily hear his unique beautiful sound and improvisational concept. Also apparent is the artistry of Ganzemuller's writing. All the compositions on Midnight Runner are Ganzemuller originals. Interestingly, the style of his compositions are varied and he uses the opportunity to explore various feels from uptempo modern postbop to dirty acoustic funkiness.

A new release by an awesome player -- what more could you want? Get it at iTunes, CDbaby, or Amazon.