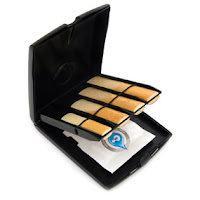 As promised today I'm reviewing Rico's reed storage case and its Vitalizer pack (which is by far the more exciting part). The reed case seems like it would be ideal. It fits multiple reed types, is air tight, and has a place to easily insert a Vitalizer pack which stabilizes the humidity at an ideal level. However, I will be returning the case, because in practice it fails to deliver on its advertised promise, the promise to prevent warping.

On day two of using the case I pulled out the reed I had just played the day before and the tip was warped. It wasn't warped significantly, like a reed that you leave out of the case overnight, however the tip was noticeably warped with minor ripples along its full length. It took a few minutes of wetting, straightening, and playing to get the reed back to its ideal state, or as near to ideal as possible after being warped.

What caused the warping? I believe there is one major design flaw here. The floor surface that the reed sits against is lined with long vertical minutely lowered slots which allow the reed to breath and air out underneath as well as above. I have used multiple reed cases with this design, and in my experience it always allows the tip of the reed to warp. Even when the humidity is well regulated the results are apparently the same. The ideal solution would be a flat hard, yet breathable surface, which would provide an unyielding surface to prevent warping that would still allowed the reeds to release moisture from underneath. That day has not arrived yet, at least not with Rico's storage case.

The Answer to Humidity Control 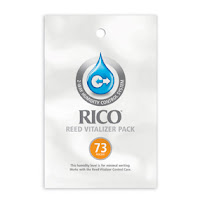 The day of fantastic humidity control has arrived though. I have converted my old reed storage case so that it is now simply an air tight bottle containing my reeds in the same plastic holders they come with and a Vitalizer humidity control pack. I have been using the 73% and it has been very stable. My old method used a sponge to stabilize humidity and a drop or two of mouthwash in the sponge to fight mold from growing in case the humidity level rose too high. It worked well mostly, never allowing mold, and keeping the reeds humid and preventing warping, but it was difficult during weather changes to gauge the humidity in the bottle. The result was that occasionally when the weather changed the humidity level would be much too high which can affect the reeds performance adversely (through a type of warping, I believe). Also, occasionally a weather change would result in the humidity level being too low which resulted in warping as well. I'm liking the no variations 73% humidity level of the Vitalizer pack. So far, so good.

Conclusion: Rico's reed case fails to deliver on its promise of preventing warping, however the Vitalizer humidity control pack does do a fantastic job of stabilizing humidity, and I recommend using it in a context other than Rico's case.
Posted by Ben Britton at 10:23 AM