Making the Most of a Transcription 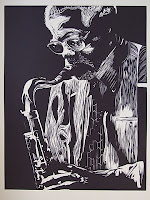 Transcribing plays a vital role in most jazz musician's development whether it's outright transcription or just trying to capture and figure out what a player is doing. This week's post is dedicated to different ways you can approach a transcription and how to make the most of it.

Transcriptions are one of the major avenues of musical discovery, and should be used heavily when developing a command over jazz vocabulary. Every great player I've read about goes through a development phase where they learn the ropes through transcription of some type or other. At one point Charlie Parker learned to play many or all of Lester Young's solos on record. You can also find a lot of Don Byas' vocabulary in Bird's playing. Coltrane was influenced by Dexter Gordon. Sonny Rollins loved Coleman Hawkins, and you can certainly hear his influence in Rollins' sound. Joe Henderson learned the ropes transcribing Coltrane, and the list goes on. A modern day example, Chris Potter, spent a lot of time in high school learning how to play like Bird and then explored Brecker's playing. If you are still working towards a command over the jazz language, transcription should be an obvious and utilized tool. What if you've already made it a fair way through your development? I'd suggest that transcription is an easy way to explore unfamiliar sounds that you can't reproduce. Whether it's a harmonic progression, a time feel, or a certain sound on the saxophone, transcription can help you learn and understand it.

Here is the part where I tell you to do some of the obvious things you're dreading in the transcription process, but I'll also give you an easy out first. There are three different levels of learning from a master player, at least in my mind. The first level, which is the loosest, is where you simply listen to the player and then try to reproduce that vocabulary or specific aspect of their playing while you improvise. This works really well for me with players I've already done some serious transcription on, or for occasions when I'm trying to reproduce a tone or time feel alone. The second level is learning from a written transcription someone else already completed and made available. If you put all the proper work into it you can still get a lot out of a solo someone else transcribed and wrote out. The 3rd, and most intense level, is actual transcription, figuring out what a player is doing note for note, rhythm for rhythm all by your lonesome. I personally feel like everyone should do level three transcription at some point during their development, but both level 2 and level 3 transcriptions can be taken through the paces.

Here are the steps I would suggest following in the transcription process:
Approaches from Dave Liebman and Steve Wilson

Liebman's is a macro approach. After mastering the solo, practice it progressively injecting more and more of yourself into the solo. The first time around try playing 90% of the original solo and 10% of your own injected improvisation changing how lines end or begin, changing rhythms and changing colors. The possibilities are really limitless here. The next time around try to play 80% of the original solo and 20% your own. Continue the process until you've arrived at 100% your own. At this point you've likely assimilated some of the vocabulary from the transcription into your own improvisation.

Wilson's, in contrast, is a micro approach. In lessons he had me take some lines I liked from the transcription and explore ways I could make those lines my own. Again any musical aspect of the line or riff is fair game. For example we could take this typical Bird line, and transform it as shown below (click here for a larger version). 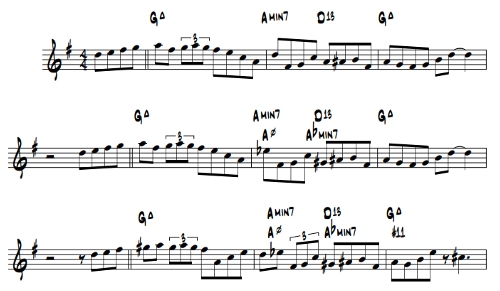 The first line is the original lick (click here to listen), the opening from Bird's solo on Anthropology with a basic outline of the chord structure above. The second line (click here to listen) has some harmonic variations introduced in the middle and the suggested chords are indicated below the original chord symbols. I've substituted an A half diminished chord from the minor ii-V over the A minor, and I've substituted an Abmin7 over the D7, a type of tritone substitution or chromatic movement.

Finally, in the third line (click here to listen) I've taken the most liberties building on my first variation and changing mainly the rhythmic content but also changing some harmonic and melodic content. My approach to changing the rhythmic content here was to shift the accents which naturally happen as the line peaks in various places throughout. The melodic changes typically serve the purpose of shifting the rhythmic peaks and accents which was my main goal in this last variation. My additional change to the harmony is the added sharp 11th over the G major in the last measure.

Another method that I personally use the most as it lends to the most improvisation, is the listen, repeat, and recreate method. I'll first master the transcription. Then on a given day I'll listen to the original recording, play the solo through one or two times, then embark on my own improvisation practice session. During this time I will try to recreate some of my favorite aspects of the solo.

For example, one of my favorite parts of Bird's playing is his rhythmic jabbing or the shifting accents within his eighth note phrases. I have worked on recreating that in my own improvisations, first predominantly using Bird's vocabulary, then applying the same shifting accents to lines of my own creation.

You can and probably should zero in on one specific musical trait or concept at a time when doing this. With this kind of focus you will most likely make more progress, however you'll still have the rest of the transcription in your ear lifting and affecting your playing. Following are some specific concepts to zero in on in a transcription:
I'm sure there are many others, but I think this list covers the basics. Hopefully, while going over it you've already had an idea of something that one of your favorite players can do that you can't do. That is exactly what you want to tackle!

One additional way to make the most of a transcription is to take some of your favorite licks or, better yet, some personalized variations and transpose them into all 12 keys. The goal here is to be able to play the lick from memory in any key. This will pretty much guarantee that a specific idea will show up in your playing.

Personally, I find transcription and transcription practice an excellent form of problem solving. An example from my own practice was tackling rhythm changes. In my formative years I was assigned the blues and variations thereof many times, but for some reason I never really worked on rhythm changes. That resulted in never being completely comfortable over rhythm changes, and in recent times I had wanted to fix that. My approach was to study two rhythm changes solos, Parker's solo on Anthropology, and Don Byas' solo on I've got Rhythm. I went through many of the processes I've described in this post, but two things I really honed in on were Parker's ability to keep his lines melodic while still defining the many changes, and some of Don Byas' harmonic substitutions over the A sections of the changes. After some serious practice (and some breaks from it) I feel comfortable over rhythm changes, and I feel like I've arrived to a point where I can create over the changes instead of just outlining them.

Here is an example of where I've arrived too after a few months of practicing rhythm changes off and on:


The first bridge starting at 0:14 begins with some playing that is really almost directly quoting Bird's playing. Of course, you can hear Bird's influence in less direct playing throughout the clip. Don Byas' influence comes in a place that really doesn't sound like him at all. The first half of the A section at 1:05, though fairly modern sounding, is really just based on one of Don Byas' harmonic devices. My point is that you can hear the influence of these players I've focused on, and they've made a positive impact on my playing. Through this process I've improved my playing specifically on rhythm changes, but I've also expanded other limits of my playing at the same time.

Transcription and practicing said transcription have been some of the primary forces in expanding my basic tool set. I have made some of my biggest leaps forward in terms of improvisation directly related to periods of intense transcription practice. Hopefully, this post has given you some new ideas, or at least some reminders of how to approach transcription in a way that will help you focus on and achieve the next level in your playing. Good luck!
Posted by Ben Britton at 1:03 PM