I've been using multiphonic as part of my tone practice over a long period of time, and while I have always thought of them as an interesting extended technique, I'd primarily viewed their purpose as a tone building exercise. More recently I began to better understand their mechanics and, in result, gained the ability to use them in musical contexts.

Classifying Multiphonics by a Single Pitch

From here I decided I could likely create a system of multiphonic fingerings that I could actually use. Most multiphonic produce sufficient pitches to make up complex 9th chords, so focusing in on just one (or sometimes two) of their pitches allows me to utilize the fingerings in a simpler and melodic way. In order to think this way, you do have to accept a lot of collateral damage however, meaning a lot of notes that have nothing to do with your desired note or even the scale, chord, or tonality you're dealing with. 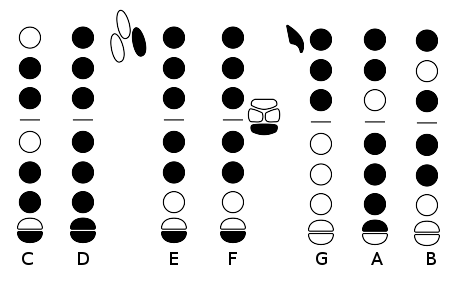 Here is a clip of a C multiphonic major scale (It sounds terrible, which is pretty much default setting for multiphonics): Multiphonic C Major Scale.mp3
Posted by Ben Britton at 12:31 PM