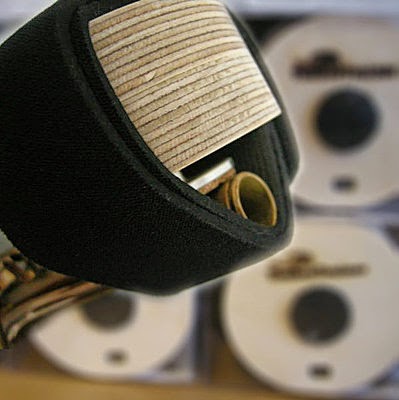 When it comes to saxophone, I'm a skeptic. I don't believe in marketing hype, and I don't buy into saxophone lore unless I prove it myself via trial and error. When I was contacted to do a review of a new product that vibrated your saxophone using sound files to supposedly improve its timbre I almost didn't even reply to the email. Deciding not to be rude by neglect, I did a bit of investigation. Despite the foreignness and, frankly, seeming silliness of the concept, one of the demonstration videos that showed the change in sound over the course of a few days of using the trainer seemed promising. At the same time I was wondering if the mic position was the same for each comparison recording, but either way I wanted to try the thing out for myself.

What It Is
Timbre Trainer is a vibrating speaker that you attach to your instrument. You plug the device into anything with a headphone jack and play music or whatever sound file you want and the trainer vibrates your instrument accordingly. Though the sound produced isn't very loud the vibrations seem to be stronger than playing the instrument at full volume. It is suppose to relieve the mechanical stress in your instrument and thereby improve the sound.

A Potential Explanation
The packaging for the trainer contains a spectrographic analysis of a saxophone's wave form before using the trainer and after 168 hours of using it. The comparison shows that various overtone frequencies present in the timbre have been increased, so this got my attention and I decided to see if there was any foundation to the claims.

One potential explanation is that the vibration releases tension in the brass, which then changes the sound. A quick look on Wikipedia showed that the machining industry does use a technique called vibratory stress release (VSR), which is basically the use of vibrations to relieve stress in metal parts. By eliminating stress the metal becomes stronger and less likely to shift. You can read about VSR here.

Timbre trainer's website claims that 100 hours of use on an instrument are needed for maximum results, but this claim didn't gel with the "20 minutes to two hours" quoted by one of the companies that employs VSR in the machining industry. The details of VSR might explain that discrepancy though. When VSR is applied to machining parts, significant stress relief happens when vibrations are applied at the resonant frequency of the part meaning the pitch the part would produce if you played it like a percussion instrument. Significant stress relief also occurs, and less violently, when vibrations at subharmonics of the parts resonant frequency are employed (If you want to learn about subharmonics, also called undertones, read here). Basically, timbre trainer suggests using various frequencies for over 100 hours, but it seems like it might be possible to get the same effect with "20 minutes to two hours" (though at what strength?) at the resonant frequency or subharmonics of the resonant frequency of the saxophone.

I did mess around with finding the resonant frequency of my neck and saxophone body, but they shift when the neck is securely in place. I always applied the trainer with the neck on, and so after messing around with some tuning tracks I found a predictable subharmonic that made the saxophone audibly vibrate the most and used that a fair amount. Not very scientific, I know, but it was cool to find that predictable subharmonics made more audible vibrations.

EDIT: The concept that the device relieves mechanical stress was originally a suggestion by some of the colleagues of the device's creators at a Taiwanese university, and is somewhat controversial. There are other potential explanatins as well including the idea that vibrations could be fatiguing the metal.

Process and Jounal
I had the trainer on my horn for the recommended 100+ hours. Most of that was done with trainer positioned on my saxophone's neck, but I did put it on a few other locations including the bell and body tube on the saxophone for around 7 hours each. The majority of the 100+ hours were spent playing various music in my collection, but a significant amount of hours were spent with using the tuning track I discovered (see above in the discussion of VSR, resonant frequencies and subharmonics).

I made an initial recordings with 3 different reeds before using the trainer at all. After about 15 hours I play tested the horn again, and placebo or not, it felt different. Most noticeably the low notes had more weight and edge. I made recordings, but couldn't sense a difference. After another 10 hours the low notes sounded even better, and the whole range of the instrument had a bit more edge than before. It was still hard to hear the difference in a recording. After 41 hours total the horn felt more responsive, but I was still having difficulty hearing the difference on the recording, which was making me wonder if I was imagining the whole thing. I didn't record again until I reached 101 hours. I made the recordings earlier today, and the difference was finally audible (tracks below).

Results
Is the difference in tone significant? Yes. Is it good? Yes. What's different?  There is more core to the sound which makes it slightly darker and gives it a bit more presence. It feels more responsive and sounds more centered, and overall I enjoy playing it more. Did it change my back up Mark VI into my main horn? No, but it feels and sounds significantly better.