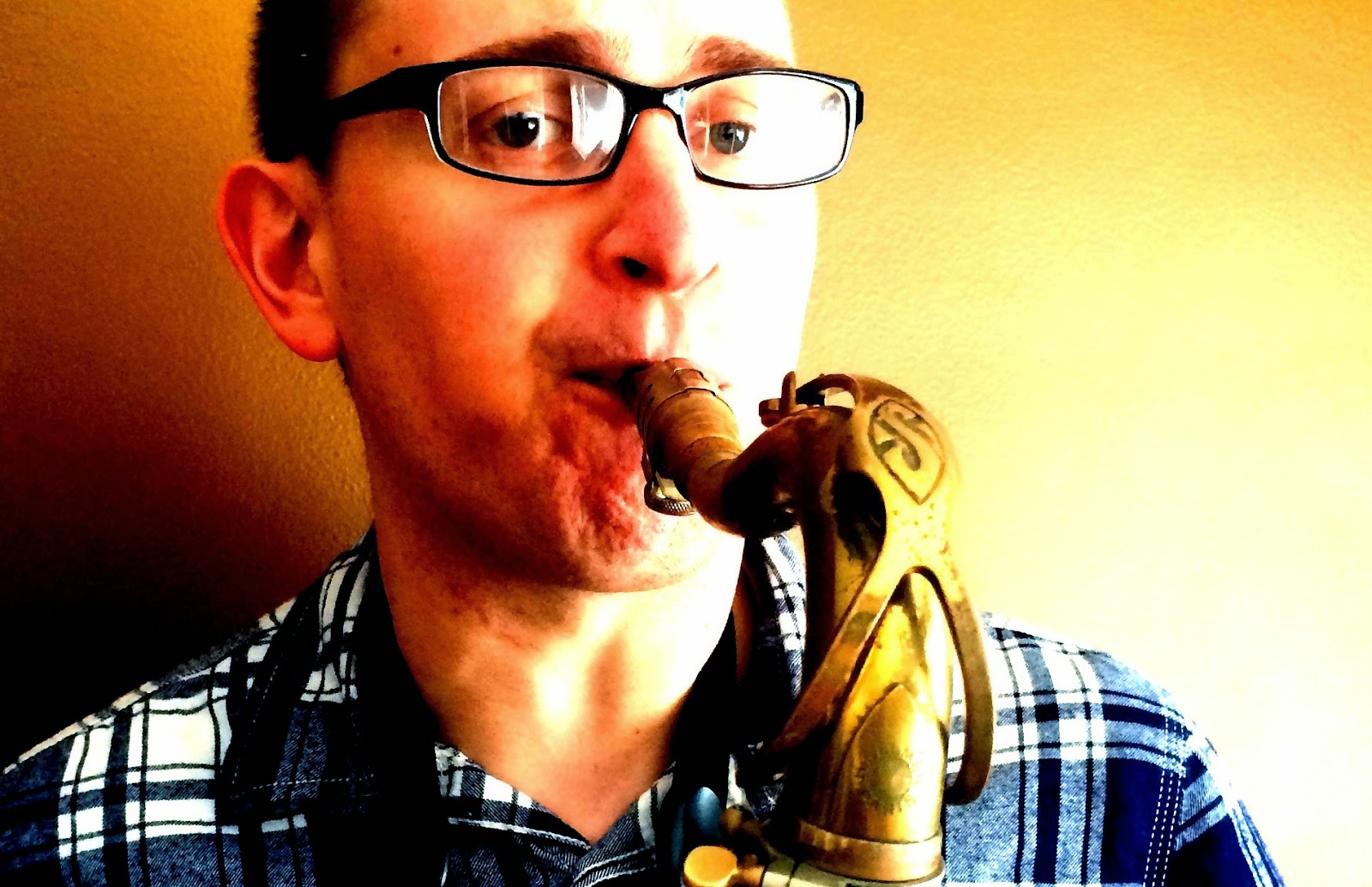 For those of you who have followed the blog for some time, you know I'm fairly obsessed with saxophone tone and exercises that improve it. Despite all of the technical know how I've come to embrace in terms of voicing, air support, and embouchure, I'd like to add a new concept that has little to do with technical execution, and everything to do with your inner ear.

In my last post I explained that I had been learning Music Learning Theory and the Jump Right In method, in which I have found very basic ways to improve musicianship significantly, even for more advanced musicians. I have recently observed how these concepts apply to a personalized sound concept and intonation.

Here is one important comparison drawn from music learning theory, which, for those who are unfamiliar with it, is an explanation of how the mind learns and processes music and has been refined over decades of research. Music learning theory posits that our brains learn music like we learn a language. First children babble, then imitate language, then begin to speak coherently developing a massive vocabulary, then learn to read, and finally write. This applies to music rather straightforwardly. To state it simply, music is learned on an intuitive level, just like language, when we first memorize a large set of melodies learned by ear (starting simply of course), simultaneously developing comprehension of the harmony and rhythm through learning bass lines and meter by ear, then learn to read music based on melodic and rhythmic patterns we already know (sight words for anyone who is familiar with reading pedagogy), and then learn to write music. Improvising fits in there as well after sufficiently developing a vocabulary of melodic patterns and can be done prior to reading music . Improvising is fairly analogous to forming your own sentences to communicate ideas, something we start doing very early on.

How does this apply to tone? The central aspect of music learning theory is developing a skill called audiation, which is the process of hearing music in our inner ear. Just like we form and think through verbal thoughts, the same is done with music. Our ability to audiate music significantly affects our ability to play (and compose) music, whether it is written or improvised, and this includes our ability to produce the tone we want.

The perfect example is intonation. Imagine a musician who keenly listens for his or her intonation. The player listens and adjusts each note within milliseconds of playing it. He also has learned to adjust certain notes in certain registers of the horn. However, this imaginary musician is not audiating strongly. For example, while sight reading a piece of music he comes to an ascending leap. Let's say the jump is from middle C up to Ab in the staff, a minor 6th. He doesn't know exactly what that note after the leap is going to sound like. If you asked the player to sing the jump he would have some difficulty if just until he got his bearings. Also, his musical intuition is not predicting the bass note that the Ab will sound against. He doesn't know what the bass motion will sound like or the harmony. Basically, the sound of the Ab is going to be a complete surprise at least the first time he hears it in this part of the piece. The musician makes the jump up to Ab, and of course it is out of tune, but luckily he quickly adjusts it in tune.

The control of intonation above was not done by audiation. It was done by imitation. He had to hear it played for him before he could adjust it. What if our musician was not so keenly aware of intonation, in other words he wasn't consistently trying to maintain good intonation. Then it's almost guaranteed he would never really play in tune, even after someone helped him get his mouthpiece adjusted to the right place on his cork.

Now imagine another musician. This one audiates each note accurately before he plays. He is playing the same piece as the first one and comes to the same ascending leap from C to Ab. He knows exactly what the Ab will sound like before he plays it. Beyond that, he also has a very good guess of what the harmony will sound like, despite the fact it's not written on the page and he has never heard the piece (He has heard the musical language of the piece and his brain puts that to use in predicting what's coming next. That's all part of audiating.). He also has learned techniques for adjusting intonation. The difference for this musician is he can accurately predict the needed intonation, so finely that when he makes the jump the note is already in tune. There is no audible adjustment of intonation. He was either 100% accurate or accurate enough that we didn't hear it. It was like he knew that piece really well and had spent a lot of time playing it with a group, but just like our first musican he was sight reading it.

I'd like to mention quickly that memorizing the sound of intervals through repeated ear training alone wouldn't make the first musician the second's equal. The second musician not only knew what the Ab would sound like, but he also intuitively understood it's context in the harmony and the overall tonality of the piece. The second musician aurally comprehends the relationship between melody, harmony, and tonality, and that makes him a powerhouse at playing in tune, as long as he has put in some technical practice as well.

Now take both of our musicians and make them improvisers. Give them the same level of creativity and technical prowess. In terms of intonation, the second musician will be consistently on the money. The first musician, will sometimes struggle with intonation, especially if he goes outside of his comfort zone, improvising in new harmonic settings or with less familiar melodic language.

Tone quality is also controlled by aural processes. In my experience, timbre is something that can be audiated. Therefore, just like in our two examples of intonation, tone can be controlled by imitation or audiation, and audiation will always get more consistent results. Of course, all the technical preparation and exercises our still necessary, however you will reach your end result much more quickly if you are hearing the timbre you want in your mind. This is something I believe Jerry Bergonzi has advocated, spending time hearing the tone you want in your mind.

I believe that is a great suggestion, and I'd like to add my own experience to this. Audiation seems to be fundamentally based on tonality and meter. I have found that by strengthening my audiation of basic tonality, my entire approach to music has improved. In other words, by improving my basic audiation of tonality I have also improved my audiation in many other categories including intonation and tone. Whether that is causation or correlation, I don't know.

Finding Your Voice: Imitation vs. Audiation

To put it bluntly, one of my pursuits over the past few years is to find my own tone. I have been somewhat satisfied with how my musical vocabulary has developed, but my tone has always seemed to be reminiscent of my favorite musician(s). My Chris Potter-like tone has been well established for years now, and wanting to get away from that, I tried various things. I've spent long periods of time not listening to much Chris Potter if any. I've tried listening heavily to and checking out other musicians in depth, like Chris Cheek, Charlie Parker and Ben Wendel. However, when my tone began changing to reflect this listening and study, it simply imitated these other musicians instead of becoming an amalgam of my influences. This was all very frustrating.

Just recently I have begun hearing a personalized tone emerging, one that reflects my influences but doesn't simply imitate them. I believe this is a direct result of my audiation practice. I believe that previously my tone was largely a result of imitation, but through improving my ability to audiate generally, I have begun to see a personalized tone emerge, one that I form in my head first and then appears in sonic reality. It's a great experience.

This makes perfect sense in terms of the audiation process. The first step towards audiation is the ability to imitate, and from there it progresses to other steps such as pattern recognition, labeling and prediction. If your aural cognition fails along the way it reverts back to stage one, simple imitation, and doesn't digest the musical material. There are many aspects of music that reflect this reversion to imitation, and intonation and tone are two of them. When we can't accurately predict pitch or intonation, we must rely on imitation for adjusting intonation. The same goes for timbre and tone. When we are not audiating, we are reverting to imitation to get us through. Finally, like I mentioned above, audition of timbre and intonation is most likely tied to basic audiation of tonality. If we aren't successfully audiating tonality, then the audiation of intonation will be impossible and the audiation of timbre will be extremely difficult.

So, what exactly am I suggesting? I'm advocating working through the basic steps of music learning theory, which I outlined here. Have fun!
Posted by Ben Britton at 8:26 AM