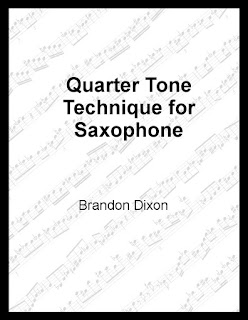 I've been interested in working on quarter tones for a few years now ever since playing with Colin Gordon while we were at Eastman together. When the situation called for it, he'd play these nasty quarter tones lines, and it sounded really great. I've been working on them myself using a new book by Brandon Dixon called Quarter Tone Technique for Saxophone. The book is primarily written from the context of classical saxophone repertoire. However, the technique is universal, and the book is proving to be a fantastic tool.

Pitch and Tone!
For a lot of musicians quarter tones are pretty far out there, and many may not feel musically compelled to tackle them. One of my initial reasons for wanting to shed them was to work on my ear for intonation. As I've practiced quarter tones my ears have definitely opened up. I listen more minutely for pitch, and the sound of a quarter step becomes more and more distinct as I improve.

One thing that came as a complete surprise was the idea that practicing quarter tones makes for a great tone exercise. The book hints at this when it suggests that students have already worked on overtones and altissimo and specifies that overtone technique is vital to playing quarter tones well. As I practiced quarter tones the first time, it quickly became apparent that they required some hefty voicing (subtle tongue position, vocal chord positioning, and other muscle movements that focus the oral cavity), and after a practice session my voicing was more fully engaged, my tone was more alive, and the horn felt easier to play, similar to the result of practicing overtones. It also appears that playing quarter tones uses voicing muscles in different variations than overtones making for new possibilities and fresh practice.

Following the section of quarter tones fingerings and exercises comes a small section with exercises to help you improve your ear and tone production including octave jumps and small intervals within the whole step (quarter tone, half step, 3/4 step). I'm looking forward to tackling these, as I've already sensed an improvement in my ears just working on the quarter tones by themselves.

The next sections consist of scales and chords derived using quarter tones. The chords can be pretty difficult to hear, as they often defy tonal expectations. Next comes a set of etudes that draw on quarter tones. Most of them are based on classical compositional ideas, though one is written in a blues style. Similar to my comment about the chords, these etudes can be difficult to hear as they aren't hinged in tonality or even the normal twelve tones. For some they will prove to be too far out. Really, jazz saxophonists will want to go check out Brecker's and Coltrane's interesting use of alternate fingerings that sometimes sound like quarter tones and Steve Lehman's more intentional use of quarter tones to get an idea of what kind of jazz vocabulary already exists out there in quarter tone land. Lastly, the book also offers a short guide for composing with quarter tones for saxophone, which could be helpful no matter the style.

Brandon has also made some other useful resources available on his website. These include recordings of each of the etudes, an online quarter tone tuner, a quarter tone transposition tool, and a list of classical saxophone repertoire that uses quarter tones.

If you're looking to learn to play quarter tones, this book a great resource for that. It’s also a less explored method for honing your ears, and it has unintentionally proven to be an interesting way to develop tone and voicing technique, which for anyone who has worked overtones ad nauseum, may come as a welcome surprise.