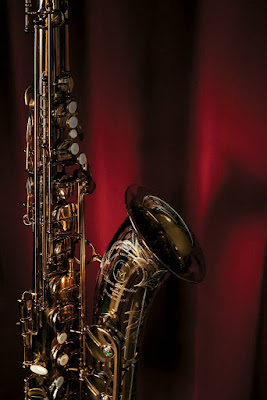 Last summer I visited Tenor Madness, one of the main vintage sax shops out there. I played some pristine Mark VIs, a couple relacquered SBAs, and a bunch of other vintage and modern horns. I also played their horn, the TM Custom. I really liked it, but it had rolled tone holes, which typically gives a horn a more spread sound than I'm used to. As a reference point, Selmer horns, like VIs and SBAs, have straight tone holes while Conn 10Ms have rolled tone holes.

I had sold my VI and been on the hunt for an SBA that I could afford. I ended up getting a relacquered SBA from another shop, but after a few days I realized that the sound really thinned out when I pushed it hard, and so I sent it back. My next try was a Selmer Series III, which had ended up being a little too dark sounding and too resistant for me, so I kept looking. While at the JEN conference in Dallas I ran into a buddy, Jeff Pifher, a very good player, who let me play his pristine original SBA (the horn in the linked video). That was an eye opener. It was a great horn, but it wasn't the perfect horn I thought it would be.

In the meantime Tenor Madness had come out with a straight tone hole horn. I went ahead and bought one, and I've had it for about a month now. It's a fantastic horn, and I'll be writing a detailed review with a video in the near future when things are a bit quieter for me.

I'm also excited for two recording projects that are coming to fruition. A collaborative project, R.O.C. jazz collective, I'm part of will be releasing a EP very soon, and my new record, with a bunch of original tunes, will be out sometime this summer. Lots of exciting things all around.

Lastly, I don't know that I've really said it here on the blog, but I'm teaching jazz and woodwinds now at College of Southern Idaho in Twin Falls, so anyone out here in the northern mid-west that wants to play, hang, or take a lesson, please let me know!
Posted by Ben Britton at 9:04 AM