A Glance Into Tone

I've always guessed at what mix of harmonics or overtones result in different timbres, and I recently discovered that there are spectogram programs/apps for computer and mobile devices. A spectogram analyzes audio and shows you the strength of frequencies in any given sound. I used a program called Spek for the following experiment.

A quick test lent some interesting results. I recorded my stencil Super Dynaction against my Mark VI. For both of these I played long tones on low B-flat, regular B-flat, and B-flat with the octave key. The sound clip, which is rather boring but available here, consists of six long tones. The stencil SDA is first and the Mark VI is second. My personal impression from playing the horns (and from listening to recordings of them) is that the Mark VI is punchy, centered, and contains a mix of both dark and bright elements. The SDA is more spread and has a warmer sound. However, it still has a large presence. Now let's see what those differences look like in the spectogram image of the sound file: 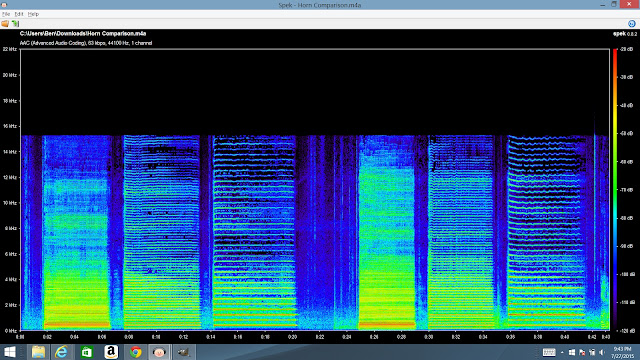 Looking over the image, you'll notice several differences. One that sticks out to me is the significantly higher amount of green at higher frequencies in the three Mark VI long tones on the right. The other is the more intense amounts of red seen in the lower frequencies in the SDA long tones, except perhaps in the highest long tone on each horn.

My brother, a trumpet player, was visiting so we tried recording a trumpet with different mouthpieces. We pitted my son's 7C mouthpiece against my brother's "GR". The GR was clearly more focused and powerful. Here are the two tracks: 7C vs. GR, and following are two spectogram images. The first is of the 7C and the second is GR. 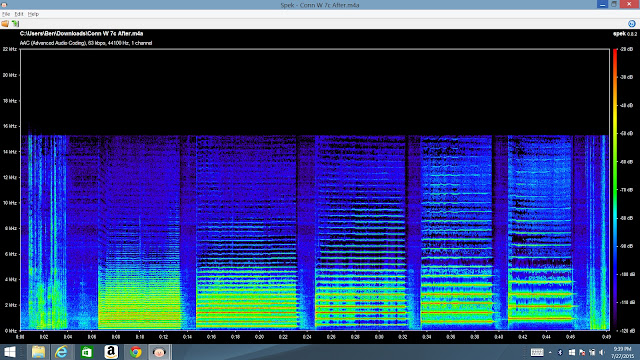 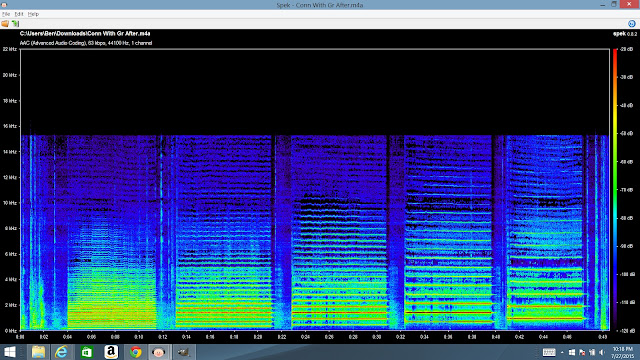 Interestingly, if you examine images in their full size, the clearest difference is increased and more defined amounts of green in the higher frequencies. Considering this shared ground between the examples of the tenors and the trumpet mouthpieces, an educated guess is that the stronger higher harmonics can represent a more focused and punchy sound. I bet this could be easily confirmed or refined with a little study of timbre and acoustics. Either way it is all very interesting, and I'm looking forward to learning more about it.

What's the take away from all this? One idea, is that technology could help you in analyzing sound. I think it could be particularly helpful when you try brand new equipment in a foreign space. In a situation like that it can be really difficult to get a realistic idea of what the equipment sounds like. I could imagine that at some future point players will want to see spectogram images of how they sound on a horn or mouthpiece before they buy it (or at least I can imagine myself doing that). Happy spectogramming...