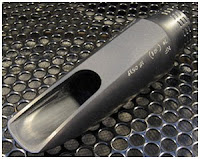 Last week I featured Saxscape's Naima, a fantastic sounding mouthpiece, and this week I'll overview three more Saxscape models: the SL, a tribute to the Slant, the Xtra Dark, a standout dark mouthpiece with a kick, and the Fat Cat, a much more agile mouthpiece than its name suggests. These three and all of Saxscape's other mouthpieces are in a hard rubber format made from an environment friendly synthetic material.

The SL is Ken Barry's recreation of the classic Otto Link Slant.  It's not a physical replica so much as a recreation of the Slant's sound. The SL's tone is a warm and colorful one, and on first impression it is similar to but a little warmer sounding than Otto Link's recent Slant recreation (the "Vintage" model). The colors in the tone also resemble Saxscape's Naima, just in a darker less punchy format. The mouthpiece feels great to play and there are no flaws to report as far as playability and response.  Overall, the SL is a solid warm sounding mouthpiece with good playability and response.

Here is a clip of me playing a couple choruses of Beatrice on the SL.
Ben Plays Saxscape SL.wav

Among dark mouthpieces the Xtra Dark is a standout set apart for a few characteristics that make it a lot of fun to play.  First, is the fact that its sound is easy to hear and well defined even from behind the horn.  The tone's subtlety and definition are easy to hear while playing, and it excels in this category relative to other dark sounding mouthpieces. Second, is the ease of the altissimo register, which sings in a way untypical of a darker mouthpiece. There is little or no increased resistance in the altissimo register, and the tone refuses to thin.  Third, is the tone color of the mouthpiece. While producing a thoroughly dark tone "inspired by the Selmer hard rubber pieces," it also has character and flexibility toward some brighter colors reminiscent of the SL and Naima. Overall, the Xtra Dark model feels great to play and produces a flexible dark tone which combined create a really fun playing experience.

Here is a clip of me playing the first two A sections of Body and Soul on the Xtra Dark.
Ben Plays Saxscape Xtra Dark.wav

While the Naima, SL, and Xtra Dark all felt like different gradients in a related tone color family, the Fat Cat sounds and feels like an entirely different beast. Though Saxscape's website says this piece "has a fair amount of resistance," I found it to be the least resistant of the bunch.  The response is quick and over all feels very easy blowing.  The free blowing aspect of the Fat Cat iss almost too much as my sound started to break up when I really pushed the mouthpiece.  The tone is a combination of highs, lows, and mids with the focus on the mids and highs, that gave the mouthpiece a slightly spread light on its feet tone quality. Overall, the Fat Cat is an easy to play vibrant sounding mouthpiece with nearly too little resistance.

Here is a clip of me improvising freely on the Fat Cat.
Ben Plays Saxscape Fat Cat.wav


Note to the readers (not related to the review): Next week I'll begin a new weekly exploration of saxophone technique and improvisation.  Occasional reviews will continue, but the overall focus of the blog will be switching from saxophone equipment to saxophone playing.  Please, come back next weekend and check it out!
Posted by Ben Britton at 9:40 AM