Reeds & Humidity, Embouchure, & Get a free copy of my Upcoming Recording: Children at Play

Today, I've got a number of things on my mind, so I'm just going to write about them all. First and foremost, my group Unconventional Riot just went to the studio last week and made our first recording which will come your way very soon as a mini-album or EP titled Children at Play. I've started a blog-site for the group at riot.benbrittonjazz.com where you can see a video of the band playing live last week and find out some more about the group and the imminent release. In preparing release I'm collecting ideas about how to promote the EP, and for the 3 best ideas I'll be giving away free digital copies of the entire EP. Post your ideas in the comments of the contest post at riot.benbrittonjazz.com. 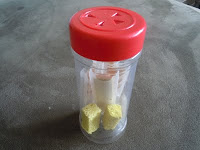 I have recently had a little run in with my reeds. Your going to need a little context though. Over the winter time I found a great way to store my reeds. I have an air tight bottle into which I put a few pieces of mouthwash laden sponge. The mouthwash in the sponges fights off mold for a good week or two and keeps the reeds humid. This was working great until the higher humidity levels hit here in PA in the the last little while.

We all deal with humidity and reeds, so here are my 2 cents on the subject. When reeds are in a low humidity environment they shrink, just like the wooden doors in your house. They can get too soft and thin sounding when the humidity goes below the reed's ideal level. In a high humidity environment they expand, and like the doors in your house that can become difficult to open and shut, the reeds can become too hard and edgy sounding as they expand too much.

Like I was saying earlier, as the humidity hit, my reed keeping system met its match. The humidity inside the air tight container was now too high and my reeds began playing a little too hard and edgy. I solved the problem by cutting some holes into the top of my old bullion container with a pairing knife. It's definitely not neat looking, but it works great. When the humidity drops again I'll cover the holes up with masking tape or something along those lines.

Last, but not least, I recently had a realization that I'd like to share with you. I've always been under the impression that a relaxed (somewhat loose feeling) frown is the embouchure that best allows the reed to vibrate. I was WRONG and here is how. A relaxed frown apparently doesn't get enough of your bottom lip out of the way of the reed. You need a more pronounced frown to completely free up reed and hence the sound. Its somewhat tricky to find just the right frowning feeling, but once you find it you'll need a healthy amount of it. My new embouchure uses more of my frowning muscles and has a cleaner and less fuzzy sound.  Here are the clips of when I first started experimenting with this. You can hear that I wasn't completely comfortable with the pronounced frown yet, but the cleaner sound is very apparent.