First, something completely unrelated. This is a video clip from an alternate take I really liked of the title track of my upcoming EP. At this point we had just recently arriving to good earphone mix. Its nice when you can hear yourself (not to mention the rest of the band)! You can also hear and see more here.

For today's post I wanted to explore some common hard rubber tenor mouthpiece you often find in music stores. The Meyer and Vandoren's Jumbo Java are two very common ones.  I thought about reviewing a Claud Lakey as well, but I recently played one for 2 seconds, which was long enough to remember how abrasively bright and edgy those mouthpieces are. I settled on these two, which both surprised me in their own way. 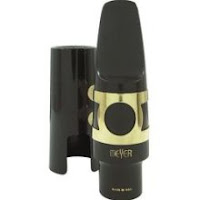 This is one of the first mouthpieces I owned on tenor and on alto. I loved it on alto and I hated it on tenor. I've always remembered it as alive and beautiful on alto and dead and muffled on tenor. Recent experience has changed that perception for me.

The Meyer on tenor is definitely a warm and dark sounding mouthpiece, but it isn't dead sounding. I was pleasantly surprised by a nice spectrum of overtones that accompanied the overall dark tone. The mouthpiece has enough vibrance to give the sound a bit of presence. The piece definitely had more presence than I remembered, but I don't know if it's enough for most players.  On a side note, that vibrance can quickly be stifled by a badly formed embouchure. I experimented with different embouchures while playtesting and the mouthpiece is very sensitive to how the embouchure is formed. As soon as I put too much pressure on the sides of the reed, the sound died and the mouthpiece sounded dead as dead gets. I've been toying around with the idea of recommending this mouthpiece to students for that very reason. As long as they are paying attention to their sound, it would force them to play with a well formed embouchure.

The ease of playing, flexibility, and response of this mouthpiece are average. In this way it doesn't stand out from the pack. It plays well but not exceptionally in any of the categories. The mouthpiece does play very evenly from the bottom of the top of the saxophone's range though the altissimo register does take more focus than some other mouthpieces.

Conclusion: Though the mouthpiece is a solid entry among darker sounding mouthpieces, it might not have quite enough presence to satisfy the average tenor player.

This playtest toppled another of my misconceptions. I had always thought that the Vandoren Jumbo Java mouthpieces were otherworldly bright, and though these are fairly bright mouthpieces they aren't anywhere near the scary realm of Claude Lakeys!

The Jumbo Java has a powerful bright sound with some warmer colors present as well. The tone is even through the range of the horn, and though the altissimo register isn't as full sounding as the rest of the range it isn't thin sounding either. The sound isn't extremely flexible, meaning there isn't the same large spectrum of less edge to more edge you might be able to access on another mouthpiece, but it does get the job done.

Where the mouthpiece really stands out is in its response.  Low Bb comes out extremely easily both with a full tone and subtoned.  The mouthpiece is very sensitive to changes in dynamics making it easy to smoothly change from soft to loud quickly.  The tonguing, in parallel fashion, also feels effortless as the mouthpiece responds very quickly to articulation as well. Playing the mouthpiece just feels easy overall.

Conclusion:  This is a powerful and brighter sounding mouthpiece that feels great to play.
Posted by Ben Britton at 2:36 PM