Theo Wanne's Brahma, both hard rubber and metal models, are under review today. These have recently become widely available, at least out east, through Sam Ash. Sam Ash is honestly becoming one of my favorite music stores due to carrying a nice assortment of sax stuff (my reeds are pretty well priced too).

The Brahma models are part of what Theo calls his "Performance-Line", which is basically the little brother of the "Pro-Line" in terms of cost. A cheaper production process gives the Performance-Line a few hundred dollars advanctage, however these are still costly mouthpieces - $435 for the metal Brahma and $375 for the hard rubber Brahma.
So, what do you get for your $400? 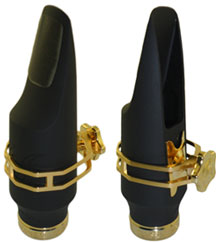 Brahma (Hard Rubber)
The hard rubber Brahma's tone is a nice mix of bright and dark. Its sound has a solid core, which side steps any complaints of a thin sound, but it also has some brighter overtones in the sound giving it power and projection. I do have a complaint, and that is that the mouthpiece is somewhat one sided in its tone color. Though you can push its tone color boundaries, the tone doesn't feel as malleable as some other mouthpieces I've played including Theo's Pro-Line pieces which I'll review in the near future.


The mouthpiece has a healthy amount of back pressure or resistance, actually a bit more than I'm use to or like (on my Florida era metal link).  However, the resistance is in no way extreme and is very even from the bottom of the horn up through the altissimo register.  The resistance did allow me to push the mouthpiece to loud volumes without losing control.  That tends to be the trade off - more resistance often equals more control at higher volumes.


The mouthpiece was easy to control in almost all aspects including intonation, articulation, and dynamics. It responded quickly and easily. In this way it was everything you'd expect from a near $400 mouthpiece. I would like to say that you can get this level of control for somewhat less money. Both the Saxscape mouthpieces and the new "vintage" model hard rubber Link provide a similar level of control and quality at a lower price. 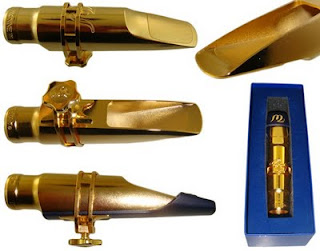 The metal model has a very similar tone to its hard rubber counterpart. It sounds a shade brighter from behind the horn (meaning while playing), but the mouthpiece doesn't necessarily come across as noticeably brighter in the sound clips. It retains a powerful solid core of sound and has a nice mix of highs and lows. Even more so than the hard rubber model, the metal Brahma's tone is one sided and has a somewhat limited tone color palette.

The feeling of blowing through the mouthpiece is very comfortable. The resistance is at a nice intermediate point, not too much and not too little. I felt like I could comfortably push the mouthpiece to its extremes, but I never felt like there was too much back pressure while blowing. The level of resistance was even from the bottom to the top of the horn. I was surprised that the mouthpiece, though tip opening was the same as the hard rubber model, taxed my chops much more quickly. That would be something potential buyers should be aware of.

The control of the mouthpiece is again everything you would expect. It responds even more quickly to dynamic changes than the hard rubber version, articulation feels quick and easy, and intonation is flexible and easy to adjust. Honestly, this is a very good mouthpiece, and I'd probably recommend it over some modern metal mouthpieces with comparable prices or greater. However, a much cheaper alternative might be a modern Otto Link Super Tone Master which has a larger palette of tone colors, though the sound might not be as powerful or immediate.
Here are some clips from my playtest:
Ben Noodles on Metal Brahma
Ben Plays Confirmation on Metal Brahma

Conclusion: The metal Brahma has a powerful tone which isn't too dark or too bright though it is very one sided. It feels great to play and has the control you'd expect for the price.
Posted by Ben Britton at 8:49 AM