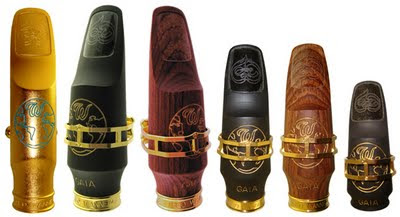 As I mentioned last week, Sam Ash recently started carrying Theo Wanne's mouthpieces, so I've had a fresh infusion of mouthpieces to review.  Today's subjects are the metal and hard rubber versions of the Gaia, which are Theo Wanne's interpretation and modern version of a combination of classic vintage mouthpieces.

Much like the previously reviewed Theo Wanne pieces, the metal and hard rubber Brahma, the metal Gaia's tone has a solid core somewhere in between dark and bright. The overall tone of the mouthpiece leans slightly towards the bright side. Its tone is fairly similar to my Florida era metal Otto Link, with the Gaia having more color but less presence. The metal Gaia's tone color does have some flexibility. I could push the mouthpiece towards brighter and darker colors fairly easily. A lack of flexibility in tone color and a one sided sound were two of my major complaints against the previously reviewed Brahma, but the Gaia is more flexible and malleable making more variations in tone color possible. The piece has plenty of power. The sound has enough punch to make it immediate and cutting but not so much that it becomes edgy or abrasive. Overall, the piece can achieve a sound that is beautiful, versatile, and powerful.

In terms of control the mouthpiece leaves little to be desired. The dynamics, articulation, and register changes all responded smoothly and very quickly as you'd expect from a high quality hand finished mouthpiece.

Conclusion: This is a flexible mouthpiece with a powerful and colorful tone leaning slightly towards the bright side of the spectrum. It feels great and unique to play and has no glaring flaws.

Playing the piece does feel somewhat different however. The hard rubber Gaia feels a little more resistant than I'm used to. That resistance is even throughout all registers of the horn though. I wouldn't say the resistance is too much but it is apparent.

The control of this mouthpiece, like its metal counterpart, is flawless. There are absolutely no road blocks in terms of articulation, changes in dynamics, changes between register, and changing between full tone and subtone.

Conclusion: The hard rubber Gaia has flexibility, punch, vibrance, and a nice mix of highs and lows in the tone. The mouthpiece is slightly more resistant compared to its metal counterpart, but it has great control and feels good otherwise.
Posted by Ben Britton at 11:23 AM