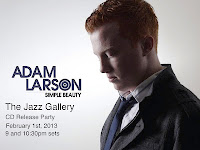 Recently Adam Larson sent me his debut album, Simple Beauty. Larson is a young NYC player who already has some heavy momentum to his career, fueled with regular performances, teaching, writing, and a slew of endorsements and reviews. Like a lot of jazz artists today who want to make a career for themselves, he has formed a working group which serves as the line up for this album.

To start off, I'll say that the album is definitely worth hearing. Each member of the group stands strong. There are no weak links, and every player has shows their mastery of the material and their instrument. The writing is interesting, catchy, and thoughtful, and often reflects a rhythmically driven style currently being defined by other saxophonists like Chris Potter, Donny McCaslin (among other instrumentalists).

Adam Larson, as a saxophonist and improviser, holds his own for his debut record. He comes off as confident and creative even during the sometimes rhythmically and harmonically tricky settings he has written into the tunes. His vocabulary sounds like it is driven by improvisation and the development of musical ideas rather than by an emulative set of lines or phrases. There is the occasional reference to a modern tenor player's vocabulary or style, but largely Larson is playing his own musical approach, which is no small feat for a young player or veteran. His sound is clear and full, and while his sound and inflection sometime invoke some of today's great players (Chris Cheek, Mark Turner, Chris Potter, Donny McCaslin), it is also apparent that Larson is developing his voice in terms of timbre and inflection. Throughout the record Larson shows that he is a gifted improviser and saxophonist who is creating and playing with skill and originality.

Click here is a link to the album on iTunes, and below is a live performance of "Good Day Without You" from the album.