Intonation and Your Ideal Sound 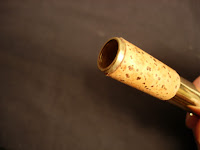 One of the most satisfying musical experiences is listening back to a recording of yourself and hearing your tone and improvisation match up to your aspirations, or come pretty close. If you record yourself on a semiregular basis, and you should, then you will notice that the most successful recordings usually have a common element – good intonation.

Intonation has an incredible effect on tone quality. To some this might sound counterintuitive, but there are number of tone problems that are directly related to intonation. It’s true that there should not be a huge difference in tone quality between a saxophone tuned to A440 versus one tuned to A445. However, the problem enters when the mouthpiece placement on the cork tunes the instrument flatter or sharper than the saxophonist’s ears and expectancy or the other instrumentalists he or she is playing with. As musicians we listen for intonation constantly, and though some are more sensitive than others, our ears constantly track it. When the saxophone mouthpiece is placed too far in or out on the cork, your embouchure responds in an effort to correct the issue. In result your embouchure and voicing is affected, which can really mess with your tone.

Luckily, there are a few indicators that can help you know if your mouthpiece placement on the cork is interfering with your technique. These include resistance, vibrato and inflections (bends), and timbre. Playing either with a mouthpiece that is too far out (flat) or too far in (sharp) can negatively affect all of these. That being said, adjusting for flat intonation generally has more pronounced effects so we will start there.

Too Far Out
Generally, musicians have a good notion of when they are playing out of tune if they are flat. For some reason, flat intonation has a very distinct and unpleasant sound. That’s a good thing because you can hear it and adjust your mouthpiece position accordingly. However, when the mouthpiece is only a little too far out, you might miss it as your embouchure will tighten and bring the pitch up. If the mouthpiece was not too significantly out of adjustment, this can partly remedy the intonation problem, but the tighter embouchure then causes other problems.

First, the added tightness increases resistance, which feels a lot like playing on a reed that is too hard or harder than it otherwise should be. This becomes particularly pronounced in the altissimo register, which becomes more difficult in result. Two, the tighter embouchure is less flexible, so vibrato and inflections sound and feel more strained. You would feel like you cannot bend notes with the same ease you usually do, and your vibrato would sound shallower and require more effort. Lastly, your sound becomes smaller and the timbre loses some of it vibrancy and brightness. So, if you feel like your reed is playing harder than usual, you are having more difficulty playing expressively, and your tone is smaller and deader than usual, it is quite possible your mouthpiece is positioned too far out on the cork.

Too Far In
Adjusting for sharp intonation has its own disadvantages. The automatic reaction in this case is to loosen the embouchure and drop the jaw in an attempt to lower the pitch. Again, if the mouthpiece is close enough to the ideal position on the cork, then this can partly remedy the intonation, but a new set of problems surface. Resistance decreases, and in some instances can make it feel like the reed is just too soft. Because the embouchure is looser, vibrato and inflections become easier. This flexibility combined with the potential for accidentally bringing the pitch too high can result in inflections sounding exaggerated and messy. Depending on the amount of embouchure adjustment, the timbre can lose its punch or definition and even become distorted and grainy in extreme examples. The key things to watch out for here are too little resistance, exaggerated inflections, and fuzzy sounding or grainy timbre.

Equipment Problems
Other problems can fight against your intonation even if you have your mouthpiece placed perfectly. Reeds affect intonation just like they can affect everything else. If a reed is too soft or so old that it plays as if it were too soft, you will likely have problems with inflections and with intonation in the high register. Softer reeds require good voicing technique in order to keep from going flat in the upper register. While players with good voicing, who have worked on techniques like overtones and altissimo, will be able to focus and keep uncomfortably soft reed in tune in the upper register, other players will find it more difficult. Beyond that, the reed will also be overly sensitive resulting in exaggerated and messy inflections. On the other hand a reed that is too hard invites a tighter embouchure, and this often results in sharp intonation, especially as you go higher.

Another potential pitfall comes in ligature placement. If the ligature is placed too far back on the mouthpiece, then the reed is more easily affected by embouchure pressure. This means that you are more likely to play sharp, even if you have the mouthpiece placed appropriately on the neck. This is particularly true in the upper register.

Intonation Practice
It’s also important to spend time periodically practicing intonation. This gives you a chance to figure out generally where the mouthpiece should be on the cork and trains your ear to detect intonation problems and keep them in check. One imperative exercise is playing with a drone. Tuners usually have built in drone features. Use your ear to work on tuning at the unison, octave, perfect fifth, perfect fourth, and then the other intervals as well. Work on jumping up and down the octave while keeping good intonation. Even better practice is to play in a small ensemble with a horn section where you can focus on staying in tune during unison and harmonized sections. Another important way to check intonation is to put on a tuner while playing normally. While you either improvise or play from memory, watch the tuner and see if you are generally flat, sharp, or in tune. This can give you a good idea if your mouthpiece placement is correct.

Working on your ears and honest practice are probably the most important factors in sounding good consistently. However, knowing what to expect when things are off and how to adjust is important too. Working out the details of intonation will help you avoid compromising your sound and technique, and put you closer to playing and sounding like you envision. Good luck!