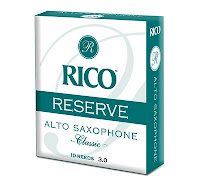 Today's subject, and the final Rico product in a series of reviews, is the Rico Reserve Classic alto reed.  This is a brand new reed Rico has recently designed and released, and it is being advertised as the "most consistent reed available".  I'll be examining the reed and that important claim.  It's also important to note that the classic reed is only available for Alto saxophone though the normal reserve reed is availble on the other saxophones.

The reeds' tone could be described as pure, balanced, and slightly dark. At softer strengths the dark overtones are less pronounced, and naturally as you progress to a harder reed strength the sound darkens.  I found I could play on either a 2.5 or a 3 reed strength and the 2.5 varied in its the darkness of the tone while the 3's weere consistently slightly dark. The tone seems most appropriate for classical playing, and most would probably find that the tone isn't punchy or fat enough for a jazz setting.

The reeds response and flexibility is fantastic though somewhat variable.  The box of 2.5 strength reeds I played through had a couple reeds that responded very easily to articulation and inflection, a majority that responded well, and a few duds that seemed unresponsive and even became less responsive in the lower register.  The box of 3 strength reeds I played on had more consistensy in their responsiveness and flexibility.  They tended to respond very quickly and easily from the bottom of the horn to the top.  In general the reeds sing into the altissimo register and feel effortless as you ascend into that extreme upper range.

Conclusion:  These are pure and slightly dark sounding reeds most suitable for the classical saxophonist.  They are very consistent though no cane reed can claim 100% consistency yet.
Posted by Ben Britton at 1:39 PM